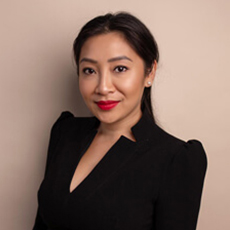 Dr Sheila Li
Cosmetic Doctor
Dr Sheila Li is an experienced cosmetic doctor and the associate medical director of Dr Leah Cosmetic skin clinics since joining in 2017. Dr Sheila is available in all three of our clinics- Moorgate, Baker Street and Loughton. She qualified as a dentist from King’s College London and also holds a first-class honours degree in Biomedical Sciences. She trained in Aesthetic Medicine 6 years ago and is an award-winning cosmetic doctor who has worked alongside Dr Leah, within Dr Leah clinics since 2017, performing thousands of injectables treatments.

Sheila shares Dr Leah's passion for raising the standards in the practice of safe and ethical facial aesthetics and she is currently completing her Masters in Aesthetic Medicine at Queen Mary University of London. She has a gentle, caring and kind nature, she has a desire to truly understand her patient’s goals and believes in subtle, natural looking results. 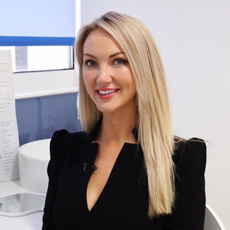 Dr Leah Totton
Cosmetic Doctor
Dr Leah Totton is a medical doctor and an award-winning cosmetic doctor with over 8 years' experience and skincare specialist with a post graduate diploma in dermatology. Dr Leah Totton was the winner of The Apprentice 2013 and founded Dr Leah Clinics in 2014 with business partner Lord Alan Sugar.

Dr Leah is an esteemed thread lift doctor, winning the Silhouette Soft prize for ‘Excellence in Thread Lift treatments’, is an international trainer for Silhouette Soft thread lifts and sits on the medical board managing threadlift complications in the UK. Dr Leah is also the leading UK doctor for Obagi Medical Skincare.

Dr Leah is an advocate for patient safety and improved regulation in the UK cosmetic sector. Her mission when she founded Dr Leah Clinics was to establish a doctor led clinics which would set the gold standard of safety in the UK cosmetic industry, she has succeeded in doing this, with Dr Leah clinics winning ‘Best Cosmetic Clinic London’ for two consecutive years.

Dr Leah is passionate about the empowerment of women and believes in subtle cosmetic results which make you look like the best version of yourself - without looking like you have had "work done".
close 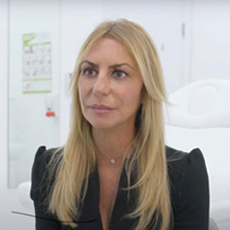 Dr Ana Barragan
Cosmetic Doctor
One of our senior cosmetic doctor at Dr Leah Cosmetic Skin Clinics who joined the company in 2017.

After graduating as a dentist in her native Madrid, Dr Ana moved to London and specialised in facial aesthetics, she has worked as a full time cosmetic doctor for 8 years, performing thousands of cosmetic treatments during that time. Dr Ana has been working alongside Dr Leah at Dr Leah clinics since 2017.

Dr Ana is based at the Moorgate and Baker Street branches of Dr Leah Clinics and has a special interest in performing Botox, lip filler, cheek filler and jawline dermal filler, plasma IQ treatment, lanluma bum enhancement and ellanse hand rejuvenation treatments. She has a naturally artistic eye and is a talented injector, and is passionate about making women look and feel beautiful.
close 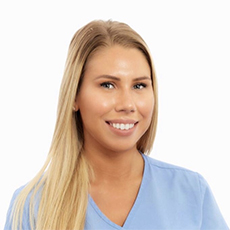 Katie Barrett
Advanced Aesthetic Therapist
Katie is an advanced level 4 therapist with over 8 years’ experience in the aesthetics industry. Having recently joined the company in 2021, Katie has a special interest for Dermapen and skin rejuvenation laser. Katie has a great deal of experience in the use of the professional skin care ranges that we use at the clinic including Obagi medical. Katie is passionate about the safety of clients in the world of aesthetics and believes it is so important to choose the right clinic when having any treatment on the face or body.
close 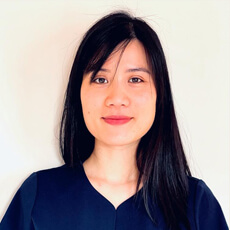 Kim Vu
Advanced Aesthetic Therapist
Kim is a qualified level 4 aesthetic practitioner with over 5 years experience. Kim is currently studying a PG Diploma in Adult Nursing at the University of New Buckingham and will graduate in 2022. Kim joined Dr Leah Clinics in 2019 and specialises in treating medical conditions such as vascular, pigmentation, weight loss, acne scars and overall skin rejuvenation. Kim’s most popular treatments amongst her clients is facial laser to treat a variety of skin conditions, laser hair removal and body sculpting. Kim is warm and kind and always wants the best for her clients, she gets joy in restoring her cleints self confidence and wellbeing.
close 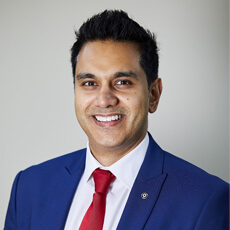 Dr Manav BAWA
Cosmetic Doctor
Dr Manav Bawa is a cosmetic doctor and GP with a wealth of experience. Dr Manav is a member of the Royal College of Surgeons (MRCS) and the Royal College of General Practitioners (MRCGP), he has also gained a postgraduate diploma in Surgical Sciences and a Masters in Surgical Education at Imperial College, London. Dr Bawa is also currently completing a Diploma in Facial Aesthetics.

Having jonied the team in 2018, Dr. Manav Bawa has a kind nature and a truly holistic approach towards his patients and boasts a patient-centred outlook that provides bespoke results for each individual patient. He believes in achieving natural looking results. 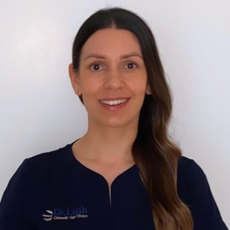 Jenna Bugeja
Lead Aesthetic Practitioner
Jenna is our head aesthetic practitioner / trainer at the Loughton Clinic and an assistant manager within the company. Jenna has over 18 years’ experience as a therapist and has been with Dr Leah Clinic for over 5 years. She has Level 3 NVQ, Core of Knowledge ln Laser and IPL treatments. Awarded Obagi Ambassador she has a special interest in pigmentation and acne. Jenna prides herself on her caring approach and loves to see her patients expectations become reality. Jenna has a natural aptitude for people and is warm and friendly, putting you at immediate ease and has remained one of our most requested practitioners for the past 5 years. Jenna believes a customised treatment plan based on her clients concerns and her invaluable knowledge helps deliver the best results.
close 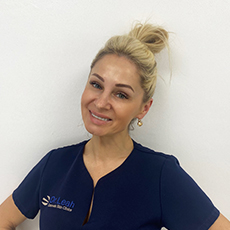 Rasa Cernova
Advanced Aesthetic Therapist
Innovative and dedicated aesthetic practitioner / clinical trainer and Head Obagi specialist at Dr Leah Clinics, Rasa holds a degree in aesthetics and has outstanding knowledge and experience. She is qualitied in NVQ level 4/5 in laser and ultrasound treatments. With over 10 years of experience of combining customised protocols in facial procedures, topical products and cutting-edge technologies within the field of aesthetics. Rasa joined Dr Leah Clinics in 2018 and has a huge clientele, she has an abundance of experience in laser treatments and is expert in this area. Rasa is most passionate in performing anti-aging treatments and working obagi medical skincare to treat challenging skin concerns such as pigmentation and acne. Rasa is the ultimate professional and takes great pride in performing the best treatments for her clients.
close 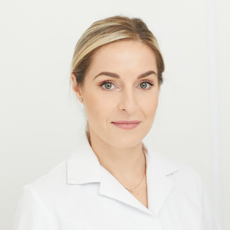 Ewa Skowron
Advanced Aesthetic Practitioner
Ewa is an aesthetics practitioner with over 10 years' experience in the beauty and aesthetics industry. Her passion and journey for beauty and aesthetics started whilst living in Spain, and continued by improving and building her knowledge and qualifications in London. Qualified VTCT level 4 laser therapist, Ewa joined the Team in 2021 as has most passion in performing advanced laser treatments. Ewa like to educate her clients about the holistic approach to skin and overall skin health and how to combine different treatments to help achieve the best natural results. Ewa brings a wealth of experience to our team and offers the best possible advice and treatments.
close
close
close

Do you need wart removal?

Are you wondering how to remove warts on the face or body permanently?

If so, our SAME DAY wart removal London treatment at Dr Leah Baker street Clinic is the treatment for you!

Verruca and wart removal is available at our Baker Street Clinic, performed by our experienced skin doctor in one simple appointment.

We operate a ‘see and treat’ service – where deemed appropriate, warts can be removed at the same appointment and you can return to normal daily life straight after.

Warts are rough skin growths commonly found on hands and feet and they are contagious. Warts can also occur elsewhere on the body such as face, trunk or legs.

Warts are a common skin condition and while they are generally not harmful, visible lumps and warts may make you feel self-conscious and they can be annoying if they keep getting caught on your clothing. For this reason may clients seek out wart removal treatment.

How to remove warts?

Our expert skin doctors are highly experienced in performing verruca and wart removal treatments- they will be able to assess your wart during the consultation and determine how best to remove it.

Here’s what our clients have to say…
I had tried all of the home treatments to remove my hand warts as I felt self conscious of them, but nothing worked, I had hand wart removal at Dr Leah Baker street clinic, it was affordable to straight forward and my warts are gone!
Sadiq, 31

£50 per additional warts (no histology check included)
One wart
£170

Which areas can I have warts removed?

How will you remove my wart?

The wart removal process is fairly simple. We can remove warts by either freezing, burning off or cutting away. Which method is used will be determined by our wart removal doctor and discussed with you at your consultation.

Does this procedure leave a scar?

You may have a small scar where the wart used to be. However, we try to minimise scarring as much as possible, and your scar will generally look far less noticeable than the wart itself.

Is it safe to remove a wart?

We will inspect your wart before attempting to remove it. We won’t perform a removal procedure if we don’t deem it safe to do so. If we are concerned about the lesion we can remove it and send it for histology (additional costs apply).

*Results may vary from person to person